In this weeks installment of A Clash Of Kings Davos has a discussion with the king concerning his options on how to deal with the men held up in Storms End. They idea of siege is to long to them and a full assault could cost thousands of lives. Stannis finally tells Davos his plan which would require Davos to call upon his skills as a smuggler. Later that night Davos finds him self in a familer place rowing towards Storms End like he had once done back when Storms End had been under siege by House Tyrell. Only this time it was different cargo different, circumstances now he was smuggling the red priestess for what reason he did not know. On the way there they debated about theology and and the red ladies purpose in Stannis's ranks. When they finally arrived the red lady was on the ground giving birth to a darkness that Davos had never seen before. So that is what has happend this week in A Clash Of Kings.

Dany making hard discensions, lady Catlyn arrives at riverrrun, and Tryon almost gets mobbed by the citizens of kingslanding

We return to find Dany still having a hard time getting the Thirteen of Quath to support her with ships and soldiers. She has no luck with the Thirteen of Quath and askes Ser Jorah if it would be wise to go to the Warlocks of Quath. Jorah urges her against it but she decides she will anyways. In the river lands Catlyn Stark arrives at riverrun to learn her brother, Edmure Tully, is preparing to give Tywin Lannister. Catlyn tries to point out to him that he would be badly out numbered, but Edmure throughly believes in his plan and so do many of his lords. To the south in Kingslanding Tyron watches Princess myrcella leave for Dorne with the rest of the royal family. On their way back to the redkeep the crowds in the streets begin to attack the royal family. Several people in the escort where killed with Sansa stark being one of the missing. Tyron at this point had lost his nerve and slapped joffre who at the time was ordering that all of the people who had attack them should be executed. In the end the hound returned with Sansa in his arms. That is what has happened in A Clash Of Kings this week

The Sigil of House Forrester sworn bannermen to house Stark 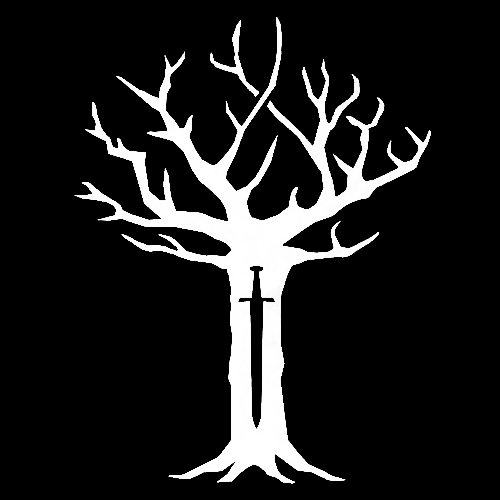 Dead kings and girls being beaten by anointed knights

The night before the battle between Renly and Stannis beratheon, Lady Catlyn visted Renly in his tent. there Renly was being armored by Breane of Tarth they conversed about the the battle to come, Catlyn could leave a shadow figure appeared and took Renlys life. When the guards heard the commotion from outside they assumed Breane had killed him Breane dispatched the guards and her and Catlyn escaped. In kings landing Sansa had awoken to find herself in the tower of the hand. She remembered that she had been taken up there after she had beem beaten by Ser Meryn. Tyron Lannister had shown up to help before it got bad. Tyron came to her chamber to confront her about the day before and the victory Robb had won in the north. She Stressed that she wanted to go back to her own chamber so Tyron permitted it.

Currently in A Clash of kings Arya is stuck at Harrenhall serving the lannisters, while there an old friend shows up, Jakken Haqar. He tells her to give him the names of three people and he will kill them. Arya's first victim is chiswyck the cruel man who over sees the area in which she works. Meanwhile in the Stormlands Lady Catelyn attempts to keep the peace between Renly and Stannis Beratheon. Neither Renly or Stannis will have it, after an exchange of insults and Stannis stating that by right he is the king, Stannis draws his sword and declares war on Renly. This is what has happened lately in world of A Clash of Kings.

Craster's Keep and the Iron Islands.

Jon's journey north with the nights watch has reached a new level of mystery and uncertainty. Craster's keep is its self is quite mysterious a small shack in the middle of the wilderness only populated by one man and his daughters... it's a little weird. Jon soon finds out that all the things that Craster is accused of being are true. One of Craster's daughter/wife's tells him that Craster gives the boys the others as a sort of trade for their safety. She also tells Jon that she is pregnant and whats him to take her and the baby south to the wall which Jon immediately refuses. On the stony shores to the south Theon Greyjoy is in Pyke awaiting his fathers orders and has been having some inner conflict about weather or not he is welcome home.

Not a lot has happened in ACOK since the last time I posted. Tyron has finally figured out who has been telling Cerci his plans and this person happens to be Grand Maester Picell. Mean while Lady Catlyn makes her way south to try to form an alliance between the Starks and Renly Beratheon. Brandon has had to feast multiple lords at winterfell, he has also met the Jojen and Meera Reed who are the children of his lord fathers friend Howland Reed. This is all that has happened in a ACOK lately I hope to read more soon. Jojen and Meera of House Reed, Game of Thrones

Big trouble in the North.

The current situation in ACOK right  now is that the north has become a shell of its former self and is fill with death and chaos. This is making is hard for Arya Stark to make it home to Winterfell. After a large fight many of Arya's companions are dead. The ones who remain are Gendry, Lommy, Hot Pie, and Weasel. All five of them have found a town and are trying to determine if its worth the risk of going into. This is as far as I have read so far I'm excited to see what happens next in ACOK.

A Clash of Kings

So far in A Clash of Kings Brandon Stark is the acting Lord of Winterfell while his brother Robb is commanding the Northern army's in the river lands. Mean while Tryon is hard at work forming Alliances with other houses to strengthen the crown and his house. Jon is north of the wall with 300 Men of the Nights Watch looking for the wilding army. Arya is currently being held captive by the Lannisters at Harrenhall. Also while all of this is happening Stannis is planning his siege of kings landing This is whats happening so far in A Clash of Kings.